Obscuria is the “real” world shown through Imagine8ing, revealing Monsters, Weird Weather, and Secret places. It exists alongside the “normal” world, but also features “Otherwhere” spaces – strange landmarks, secret cities and other places that Nodds could never ever go.

This “Veil” of “unseeing” overlays everything, and is the true world that the Nodds simply cannot see or fathom.

Obscuria is everywhere on Earth, it is not just an American phenomenon. Interesting Otherwhere spaces have been reported all across Europe, in Africa, Asia, in the sky, and in the depths of the sea. It is agreed that the exploration has only just begun!

My friends, the “land” of Obscuria is at once a combination of two vastly different places; Earth and Monstru. Sure, most of you know something of Earth, with her green forests, barren wastelands, and soaring mountains. You may heard of a few tales of Monstru, with his deep chant-chasms, purple flying rocks, and unbelievably huge beasts.

Now before you make assumptions like “oh, it’s like Earth, but with a different wrapper” you’d best hold your Kelpies. The “land” in most cases resembles Earth very little. Where you might find a mountain in Aridzona, you’d find a lake in Obscuria. And maybe it’d be different the next time you were there. Not only that, but it doesn’t follow the laws of Monstru, either. While Obscuria is oft called “the veiled lands” it’s certainly a unique land of it’s own.

That said, Obscuria does have some stability overall, and has some features that we can count on most of the time.

Obscuria is broken down into eight distinct provinces. (AKA “the Provinces” or “the Eight”). 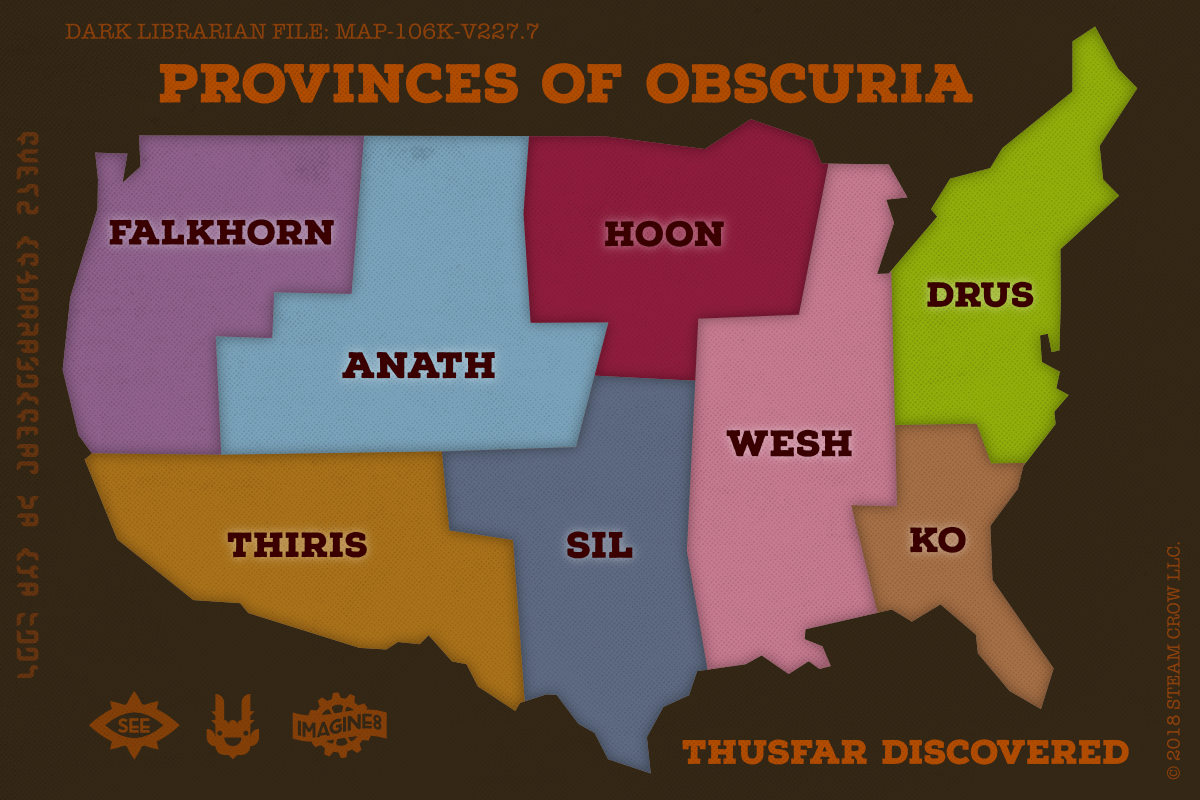 In the middle of downtown Phoenox, Arizona, there is an immense fissure that splits the city apart, North-South. For Nodds, they can walk or drive over it without noticing a thing, because for them, it simply does not exist. But for those who can Imagine8 (Monsters, Monster Rangers, Monsterologists, the unsane) it is a treacherous cleft that must be avoided at any cost. (Because, well, death!)

The Story Town, Iowa has been plagued by a constant rainstorm for the past 67 years that pelts one with a sticky, sweet rain that tastes of flowers. (Rather delicious stuff, if you ask me.)

Bardstown, Kentucky, features a strange and constant howling that seems to come from the sky itself; it often slides into pleasant melodic phrases that can last days or even weeks, and sometimes it drones a doom-sound that drives away all who are not mentally strong. Oddly, it is completely silent on October 31st.

The entire region of Spokaine, Washington has always been blanketed in a green fog which rises from Spokaine Falls. The fog hides the Golgenfot; small bat-like beasts who enjoy fluttering around children and the elderly.

The wonders of Obscuria are vast, my friends, and must be documented and explored!