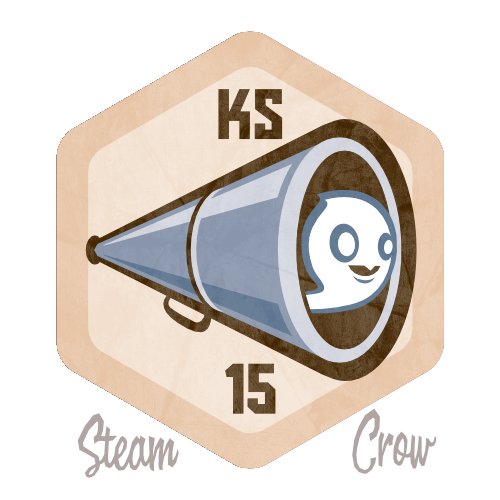 THIS MISSION IS CONCLUDED

Challenge: Convince Others to Support our Kickstarter

The Shout Scout 15 Badge was for Scouts who want to help spread the word about the 2015 Crow Scouts Kickstarter.

This is a real cloth badge – only available to folks that earn it. I don’t expect that many will be released, but we’ll see. It has a 25 pt value, on the Crow Karma scale.

Follow all of the directions on our Shout Scout Mission, and we will send you a woven KS Shout Badge.

Let us know when you’ve completed the Mission.

There is just one level of the Shout Scout 15 Badge, but it is glorious. We might use this badge for annual campaigns, so there could be a “Shout Scout 16” badge or something in the future.

The bullhorn is a symbol of the volume of your voice (idea provided by Scout MTHR-CUTTR), while YOU are the ghost providing the message.