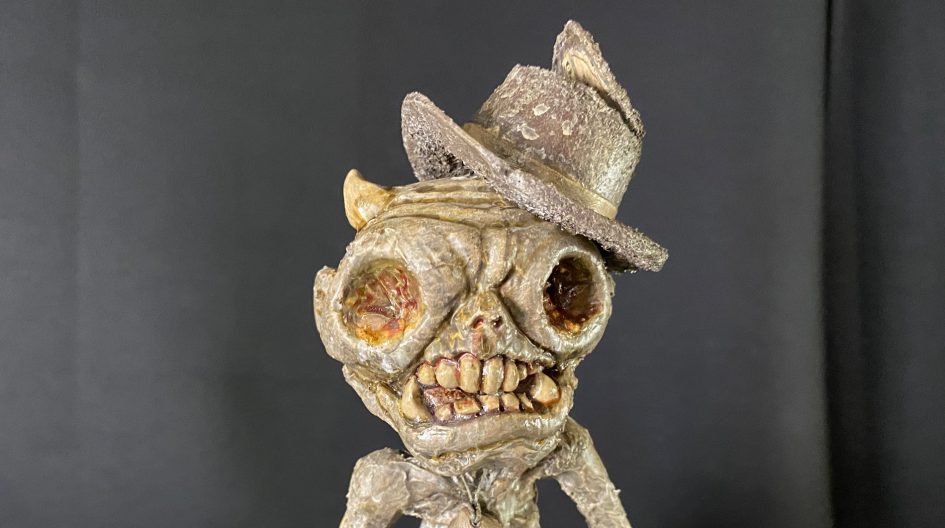 The following is a very true1 story.

Franc Marsh of Gritdown, Oregon was fishing for ground fish along the misty Pacific coast in October 1908, when he heard the most strange song emanating from a fog bank:

“Gentalman Jihm, of fang and fin
Dancin’ in watur, laughing up sin –

Gentalman Jihm, he did it agin’
Stole my daughter2, smilin’ chin ta chin –

Franc then pulled out his Blappo Brand fishing net3 and threw it into the fog, hoping to catch the singing cad. Instead of capturing his rival Karl Aldrick, the local “Singing Sailor”, he ensnared a most peculiar being; a “Fiji Mermaid4“.

He was beautiful on his outsides with green shimmery scales, but ne’er but black on the insides.

It was very small, had glistening golden-green skin, strange fins, horns, and a little soggy felt hat, and it smelled of rum, salt-liquor, and pachinko balls. It was “Gentalman Jihm”, Cad Merman.

Gentalman Jihm was a black-hearted fey of the sea; a merman prone to drinking, stabbing, gambling and several other maladies that are not fit for print. Of course, Franc Marsh had no idea, and within moments Gentalman Jihm was smoking and winning Franc Marsh’s boat in a game of Twice-Dice5.

Once Franc had lost his boat, there was a “calamitous brawl” resulted in Franc being stabbed 9 times with a tiny shiv, and Gentalman Jihm being contained in a wire fishing basket. With Franc’s screams Jihm “cried like a little baby… but not in sorrow, but in joy.” Now, Gentalman Jihm would be a bane of both sea and land.

For a time, Jihm was toured from pub to pub6 in Gritdown, attracting small crowds until the beast defamed, inflamed, and insulted the patrons to the point which he was banned from the township and Lane County, altogether.

A few months later Gentalman Jihm was sold to Larry Bark’s Soapspite Carnival as the primary attraction, which did increase ticket sales by 305% for a few weeks. Patrons complained about “the despicable little sea man” who “tried to bite and stab my children”, but profits were a rare thing for the Carnival, which continued to tour Western Oregon.

Months later it is believed that Larry Bark contracted a strange wasting disease that Jilm is said to joyfully sing about for his remaining years.

While it’s unclear what eventually killed Gentalman Jihm (Kerosene drinking contest gone wrong?) he was clearly a dried up husk when he was sold to Gold Toad’s Freak Show, in 1922. When that folded in 1933, all traces of Gentalman Jihm were lost.

This sculpture is part of our first Kickstarter of 2021, “Fiji Merman” which is planned to launch February 12th, at 7 pm MTN time.

It’s going to include a new 8oz enameled mug, a print, t-shirt, sticker, and patch. We’ve been working on it for months now, and we’re excited to finally get it going.

We hope that you’ll consider supporting our Kickstarter when it launches. (February 12th, at 7 pm MTN time.)

It’ll be a quick one… no more than 7 days long.

The top pledge will include a one-of-a-kind cryptozoological specimen “Merman”, which measures over 13 inches long, and a foot tall. It’s sculpted out of wire, epoxy clay, tissue, paper, glue, felt, and acrylic paint. It represents about 2 weeks of my life.

Check Out Our Kickstarter

1It is not really true, though the accounts seem to indicate that most of the tale was fabricated so that Mr. Bark could trick townies into coming to his carnival to spend their money on candy and balloons and play games that few could ever hope to win. In this, the author chooses to believe in it as much as is possible, as the ability to suspend disbelief is a most rare and distinguished characteristic.

2Someone who lives on the land, but should be shamed for having legs and not proper fins.

5It’s a horrible game that utilizes three dice along with rules that are so complicated and ever-shifting that no unsane person could ever hope to understand or, of course, win.