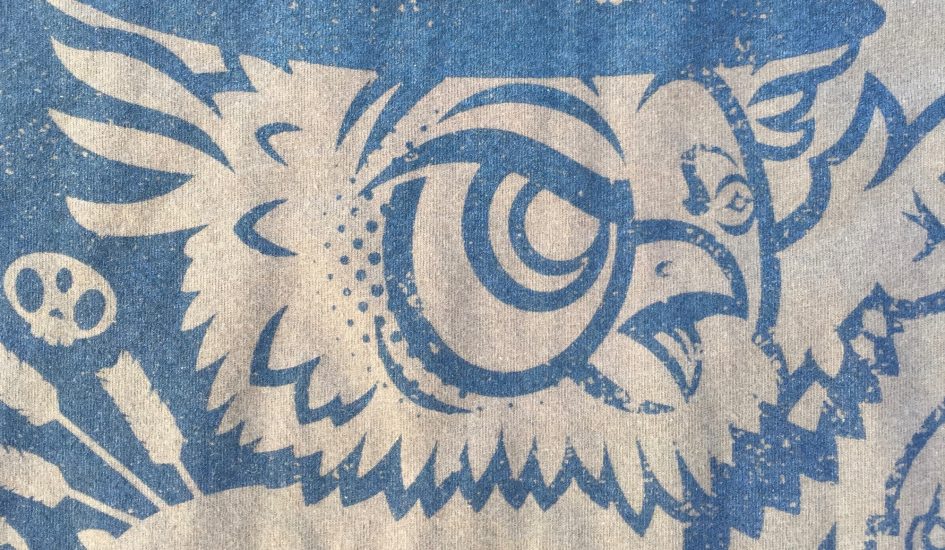 In the early 20th Century, Baron Davis had to promote the Monster Rangers to the masses, in order to spread the word more quickly behind his Town Hall Rallies.

While some felt that Marrow Thatch, a 30 ft tall Halloween Golem was the right choice, others suggested that he was perhaps a bit too scary for the 1912 American public… and so the search began.

The BLAPPO Advertising Agency (BAA) was brought in, and they quickly identified that “Woodzo the Owlbear” was the right choice, and an eight-thousand dollar advertising campaign was quickly launched.

Woodzo was a rescue Owlbear from the Thiris Province of Obscuria, saved by some brave Acolytes from the Blather Bootcamp. He was old and big, with an injured leg and some antique arrows still stuck in his back. (They never would come out.)

Thousands of flyers were printed up and dropped over 7 major cities in Irth by Scareforce Pilots, in an attempt to gain the word. A radio spot was recorded, along with the Woodzo jingle: “Owlbears mean danger, become a Monster Ranger!”

Woodzo begins to grow in popularity, and a number of products are licensed in order to fund the campaign, and the Monster Rangers.

[/pms-restrict]It seemed that anything was possible, and the Woodzo craze began to take the nation. For the first time in history, the Monster Rangers have a overflowing bank account.

Soon, hundreds of new Acolytes were in search of the ability to Imagine8, and to actually FIND a recruitment station.

The campaign’s pinnacle was the appearance of the Woodzo Float in the Blappo Centennial Parade in Chicago, July 4, 1913. The Woodzo float stood 65 feet tall, was made out of 324 yards of silk, and required 48 Monster Ranger handlers to keep it from blowing away.

Crowds pushed to see the float, only held back by Doom Mime enforcement and the Chicago Police Department. Some claimed to even see that the old owlbear himself – WOODZO – was marching in front of the float, just behind the “Janky Jasper Marching Band”, though no photographs of what was going to happen, exist.

Enraged by the smell of popcorn and wonton consumerism, Woodzo surprised everyone when he blew a gasket and broke free of his chains attacking a nearby newspaper stand and a Woodzo Stuffed Owlbear vendor stand.

The ruckus was incredible, and as the Rangers holding down the parade float fled for their lives, the Woodzo balloon drifted off, but not before it destroying 7 other character floats including “Rucko the Clown”, “Shamboy Sam”, and “Yellowjack Buckerhoff”. Many of the reports state that the Woodzo float was in fact, animated, and clawing and biting just like the real Woodzo. (Monsterologist Warlock activists are suspected to have caused this event.)

Woodzo was eventually apprehended on the 8th floor of the Garling Department Store Tower, and was safely brought down by Doom Mime #13. (A true hero.)

The backlash erupted quickly, as the story spread across newspapers and radio broadcasts across the country.

Thousands of products were burned in the subsequent bonfires which were lead by church-groups protesting the “horrible monstrosity”.

It became clear that Woodzo was no longer the desired mascot for the Monster Rangers, and was quickly retired.

The owlbear himself was relocated to a remote corner of the Hoon Province, where he is said to remain to this day, chewing on rusty Viarwire.

Baron Davis brought back Marrow Thatch as the Monster Ranger’s true mascot, where he remains to this day. Children across the world now love this adorable Halloween Golem, and seem to have no problem with his mechanical/pumpkin nature.

Today, Woodzo merchandise is extremely rare and collected by many enthusiasts who attend swap meets, antique shows, and Woodzo Meetups in their search for more obscure Woodzo branded items.